Rice is one of the most important staples in India. It was first mentioned in Yajur Veda and more than 200,000 varieties of rice are available in India today. Different rice varieties may have different morphological features, cooking, eating, and product-making characteristics. Rice varieties may be broadly classified based on their size, shape, waxy or non-waxy (based on the nature of starch), aromatic (eg. Basmati, Jeerakasambha) or non-aromatic (Ponni; Sonamasuri), red or black rice (based on color) etc., There are different forms of rice, namely brown rice (unpolished rice), hand pounded rice (minimally polished rice), raw (non-parboiled) white rice (fully polished rice), parboiled white rice, quick cooking rice (instant rice) etc., depending on the processing it has undergone. Brown rice is a whole grain which retains 100% of its bran, germ. Brown rice is prepared from paddy (either raw or parboiled paddy of any rice variety) and only the outer husk is removed. Hence it contains all its botanical components and the nutrients provided by them too. The outer layers (bran) and the germ or embryo of brown rice are rich in protein, fat, dietary fibre, vitamins and minerals, whereas the inner portion of the rice grain (endosperm) is rich in starch.
During the process of milling, the paddy is dehusked and the outer layers of the brown rice (bran) and germ are stripped off approximately to an extent of 7-10% leaving behind mainly the starchy inner portion. Generally fully polished rice (white rice) is preferred for its superior appearance, taste, flavor, aroma and textural characteristics. The rice what is being currently served on our plates is the dietary fibre depleted white rice either parboiled or non-parboiled (hence called refined grain) which is highly starchy in nature.

During ancient period, hand pounded rice (not a 100% brown rice) was consumed and today due to the advancements in milling technology (to reduce the loss due to breakage of grains in the traditional handpounding process), the hand pounding practice has vanished and is replaced by modern rice milling machinery which delivers higher yield of polished rice (either raw or parboiled). In the traditional manual practice of hand pounding, the paddy was pounded using a pounder in a stone mortar, which was then winnowed to remove the husk and minimal amounts of bran to yield hand pounded rice and thus minimal degree of polishing. This rice is also nutritionally superior compared to fully polished rice that is being currently consumed. However, brown rice contains the highest nutrients compared to both hand pounded and white rice. 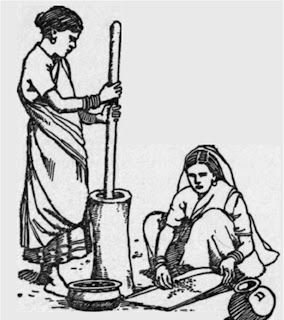 A study from our centre has shown a strong association between refined grain (polished rice or white rice) consumption and the metabolic syndrome (clustering of metabolic abnormalities including glucose intolerance, central obesity, dyslipidemia and hypertension), and diabetes risk in urban adult south Indian population. The study also reported that almost half of the (50%) of the daily calories in our population were derived from refined grains predominantly polished white rice (on an average the intake was around 250 g of polished rice (uncooked) per day).

Many studies from the western countries have shown risk reduction of obesity, metabolic syndrome and diabetes with consumption of whole grains such as brown rice. However, such a study had not been possible in India due to difficulty in obtaining genuine brown rice in the market. Of late brown rice is gaining importance due to increased awareness on the health benefits of wholegrain consumption and lots of products with labels of  ‘brown rice’, ‘hand pounded rice’ are being marketed widely. The nutrition and ingredient labels are often overlooked by the consumers. There are lots of rice samples with brown color being marketed under the label claims of ‘brown rice’. All the rice that appears brown in color need not be a genuine ‘brown rice’. Nutritionally, brown rice is a healthier option to white rice, as it contains higher levels of dietary fibre, vitamins, minerals and other health beneficial phytonutrients. Polishing decreases these health beneficial nutrients, and increases the rate (speed) of digestion and hence quickly raises the blood glucose (so a high glycemic index food). A study from our centre has indicated that with progressive polishing of brown rice, the dietary fibre content decreased and the available carbohydrate (the carbohydrates which are available for metabolism) content increased. With polishing, the decrease in the levels of proteins, fat, minerals, γ-oryzanol, polyphenols and vitamin E was also observed. Thus the process of polishing not only decreases the dietary fibre content but also the other health beneficial nutrients of rice. Such a polished rice choice being a high GI food and when consumed as a staple (consumed in all meals and in greater quantity) could further increase the glycemic load (GL) of the  diets which are known to increase the insulin demand and elicit higher glycemic and insulinemic responses triggering the risk for type 2 diabetes and obesity. 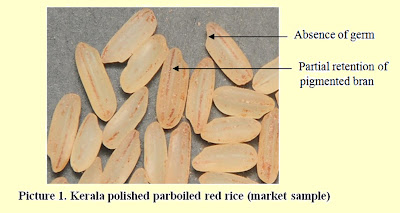 Recently, a market survey was conducted in the different parts of Chennai in shops, kiosks and super markets regarding the availability of brown rice. Rice samples with label claims of ‘brown rice’, ‘hand pounded rice’ were collected and examined. To our surprise some retailers were selling parboiled polished red rice (kerala rice) [picture 1] as brown rice. It is important for the consumers to know the characteristics of brown rice to make a judicious choice in the market. 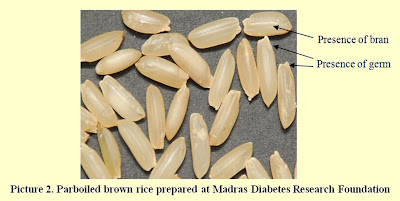 Brown rice appears brown, glossy and smooth with intact bran and the germ (picture 2). In contrast the polished white rice is whiter and is devoid of the bran and germ (picture 3). 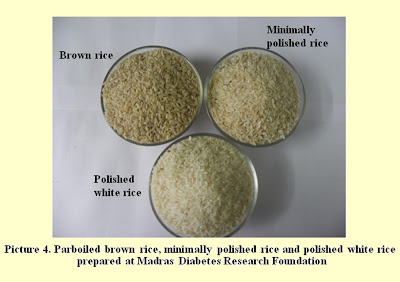 Further, evaluation of the commonly consumed Indian rice varieties namely; Sonamassuri, Surtikolam and Ponni for GI revealed all of these to be high GI category rice. Hence it is prudent to replace white rice with brown rice and also to lay down stringent food regulations for the label claims for marketing of brown rice in the country. Awareness of the morphological features of brown rice and the health benefits of brown rice will be helpful in popularization of brown rice among the rice eating population of India.
Posted by Bhavadharini at 8:47 PM

Towards Excellence in Diabetes Care